I got a new external hard drive for Mother's Day. I quickly began transferring all the piles of CD's and files stored in various computers on to it. Then it quit working. I finally figured out the problem today so all my pictures are back!!!!

Griffin Free entered the world on Tuesday June 7th, 2005. I worked a very hot auction the Saturday before and had some swelling in my feet and legs. I also had a terrible allergic reaction to some medication that Saturday morning. The swelling didn't look any better on Monday so Kent's mom took me to see my OB. He sent me to the hospital for observation. I remember having to leave Madisyn and Ty at the Labor and Delivery hall door. It was awful! I was alone and not really sure what was causing my "issues". I ended up staying overnight for observation and around 7 the next morning the nurse wheeled the bed out of the room and said "You're having a baby today." . I don't know how many times I called Kent before he finally heard the phone (he had stayed at the hospital with me until close to midnight - it was a triage room so no where to even sit comfortably). I was so scared he would miss Griffin's birth. He made it just in time. If the guy hadn't had such a hard time with the spinal he might have missed it. 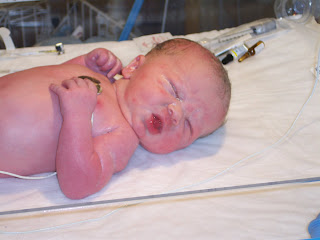 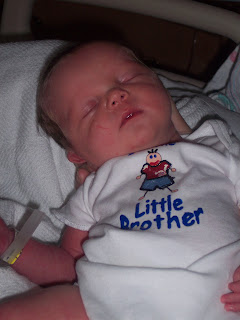 Aunt Robin stayed with me in the hospital after Griffin was born. I received so much help after Griffin's birth. Madisyn and Ty went to McDonald's and swimming frequently. 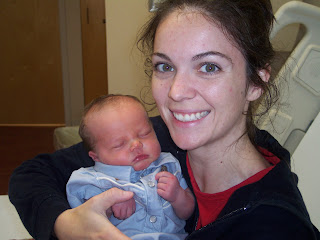 So our little Griffin was born just after 8 am. He weighed 7 lbs 13 oz and was our smallest child so far. He seemed so tiny. Griffin was named after Kent's grandpa Lawrence (Vicki's dad) and he has my dad's middle name. I love to hear him say his name is "Giffn Ree".

Sadly, I have been unable to locate the pictures from his 1st birthday. I'm praying that they are on Kent's computer.

Griffin has had problems with cow's milk. He was doing an allergy elimination diet around his 2nd birthday. His cake that year was an Angel food cake that we later topped with strawberries. 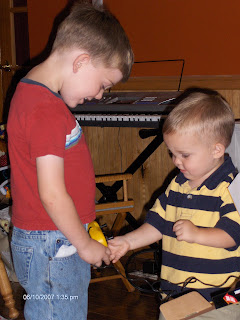 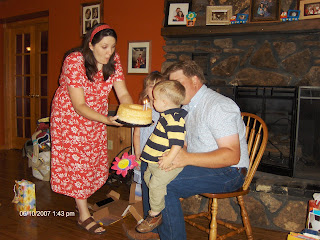 Around the time of his 2nd birthday he had a little accident. He is our most accident prone child. He wasn't quite two and he fell in the shower and we think he broke his nose. Almost 2 years later and he still has a faint bruise! His head is like a lumpy rock LOL. 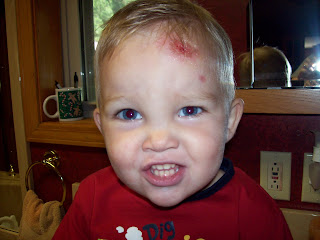 He's going into such a big boy and is very quick to let everyone know that he is "biiiiiiiig". If prompted he will reply that he is a "Biiiiiiiiig boy". In the last few months he has made tons of improvement in his speech. We still have to have him slow down to understand but he is such an expressive child. When he's talking his hands, feet and head are all moving in completely different directions! 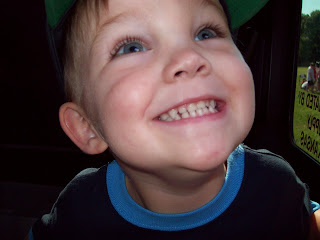 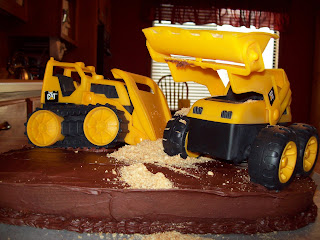 He still talks about his cake with dirt on it! LOL

I can't imagine life in the Witcher household without Griffin. We love him so much!