How big was the Ark?

This week in Tapestry of Grace we have backed up and are studying Genesis. The authors of TOG suggest that Moses wrote Genesis as an encouragement to the Israelites when they were wandering in the wilderness. Since we feel this is possible, we left the order of the studies in Tapestry as they were.

Part of the beginning of Genesis is learning about the flood and Noah's Ark. The ark was 300 cubits long and 50 cubits wide. The author suggested giving each child an 18" long piece of string to represent a cubit and measure the ark out doors, marking the corners. We started with string and began on the neighbors fence. I took a few pictures and we began. Maybe I don't have enough children or maybe my children aren't old enough to do this but a 3, 5 and 7 year old with a piece of string was not working! Our line wasn't straight, before the next person was ready with their string person #1 had moved. It was a nightmare!!! I couldn't imagine trying to mark off 300 of them when we couldn't even get 3. I think this could work with something solid like 18" pieces of 2x4s or dowel rod. Then the pieces could be laid on the ground end to end. 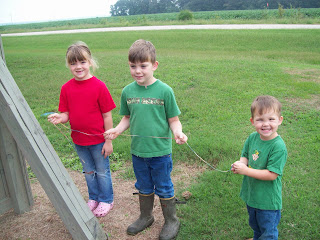 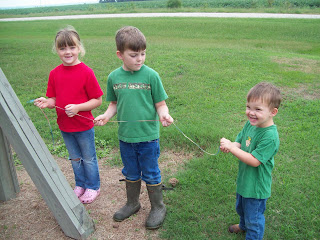 So I borrowed a wheel measure-er. I doubt that's the proper term but that is what we called it. Once again we began on the neighbor's fence. Everyone had a turn pushing the wheel. Our entire yard is only 425'. We continued on into the other neighbor's yard but I didn't let them mark it. Then we measured how far 5o cubit was. From the ditch, 75 feet will put you half-way between the house and the starting point. I think the kids were really surprised at how big it was - I know I was! No wonder it took Noah and his sons so long to build. They had no modern machinery, they didn't even have a nail gun. LOL 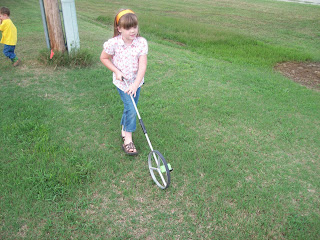 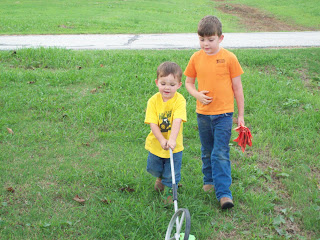 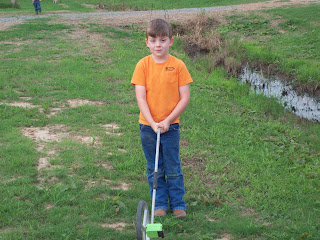 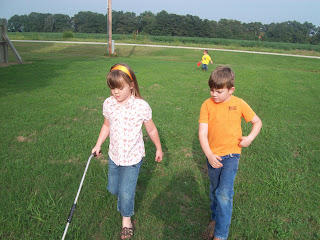 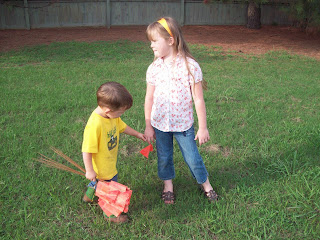