The one that (almost) got away

Not for the faint of heart. Decapitated snake picture ahead.

Friday the kids and I made a trip to the library. When we got home I began to carry our things in the house when I saw "it". The snake that got away. I'm sure in Griffin's mind it will continue to get bigger. This will serve as proof to his children and grandchildren that he wasn't bitten by a deadly pit viper (kind of like the story about walking to school uphill both ways in the snow).

It was stretched out in front of the door going into the house from the garage. It was a little longer than the door is wide but not as wide as the 4 foot sections of plywood on the garage walls. I screamed at the kids to get back in the van. I got a hoe. I called my husband. He gave advice. I hung up the phone. I looked at the snake. He was still pretty much stretched out. He raised his head up off the ground. I'm sure I screamed. If I didn't, I thought about it. I swung the hoe. . . . .

Now Mr. Snake was really mad. He coiled up and was lifting his head much higher. He was darting his tongue and hissing. I began to shake. I called my husband. I begged him to come home. He said he would. Did I mention we live about 25 minutes from his lot? Twenty-five minutes is a long time when you are 4 feet from a snake. I watched him. I let the children who were begging for a potty break get out of the van on the driver's side (the snake was at the front passenger's side). They went around the entire house and entered through the back door.

Kent arrived. I really don't think I've been much happier to see him, ever! One of my lovely children (I'm guessing of the male variety) had pushed a furniture dolly up by the door. The snake was partly on the dolly between it and the wall. Which is part of the reason I missed. I had to raise the hoe up high enough to get between the dolly and the wall. And you know I was going no closer than absolutely necessary. I was holding the very end of the hoe. When he coiled I was afraid I wouldn't be able to get a clean blow just behind the head and then I would have a really angry snake.

Kent carefully slid the dolly out from under the snake. Then he used the dolly to hold it down. It took a few attempts to get a clean cut but the snake was finally headless!!!!!!!!!!!!!!!!

Now - can I ignore the fact that Madisyn says she saw another the next day! 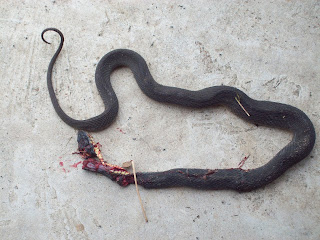 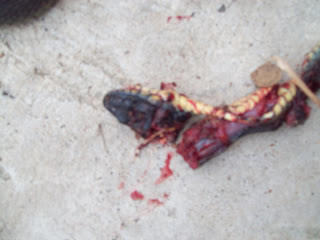 Email ThisBlogThis!Share to TwitterShare to FacebookShare to Pinterest
Labels: snake