I don't come from a politically active family. Kent doesn't either. No signs in the yard, no campaign stickers. The first time Bush ran I picked up a sign but it never made it in the yard. The 2nd time we looked for one of those "W" bumper stickers (with our last name it was super cool ;) ) but I never found one. John McCain wasn't our first choice for the Republican ticket but like most of the rest of the party, we became very excited when he chose Sarah Palin for his running mate. So much so that we went to Kent's parent's house Wednesday night after church to watch her give her acceptance speech. (We cut our broadcast TV off in May - we only watch tapes and DVDs now.) 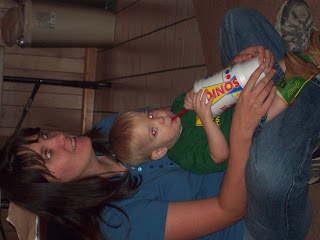 Ben watching the speech with me.

The Sonic cup was empty but there is still something about a red straw.

I have to say, I very excited about what she adds to the ticket. I'm not in favor of women in such a high position. I believe that women should tend to their families and their homes - but that's another post. :) I think Sarah Palin will greatly enhance the office of Vice President and what I know about her (I want to learn more) I wouldn't be afraid of her as President. I can see her running when McCain is done. She has just as much "experience" (if not more) than Obama or Hillary.

While the adults enjoyed Rudy's speech and that given by Palin, the boys tried to see how much of the snack drawer they could raid - Isn't that half the fun of going to Nana and Papaw's? ;)