Another activity we participated in this summer was 4-H Conservation Day. Each year the Soil Conservation service puts on program for the 4-H kids at their office. 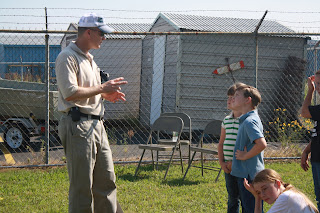 This man was from Woodruff Electric Cooperatives. He had a trailer with power line models on it. He talked about electrical safety and used special equipment to show what happens if you touch a power line. He used a hot dog to simulate a hand and it caught on fire! 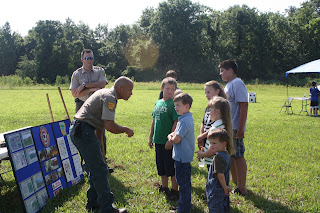 This set up was about forest fires. They told the kids that most forest fires are caused by carelessness. They showed different hand tools that they use when battling fires. When he asked if anyone had any questions, Ty grilled him about the dozer they had pictures of on the board. Of course my child would care more about the dozer than the ranger's actual job. LOL 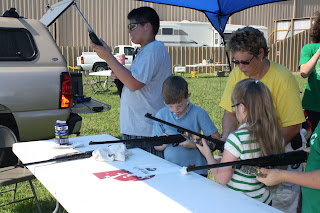 The next booth was from Arkansas Game and Fish. The kids got to shoot BB guns at targets after a lesson in gun safety. Ty had a little difficulty because the woman running the booth kept trying to get him to hold the gun right handed. Once he was allowed to hold it left handed he didn't have any trouble. 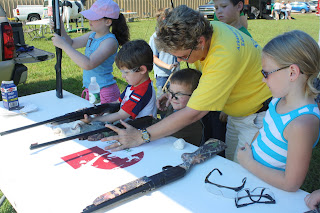 Griffin was quite adorable trying to pull the trigger. His arms weren't quite long enough to do it alone.
at 12:20 AM