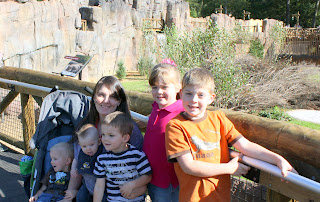 The kids and I with the grizzlies in the background. While we were there the bears preferred to nap.

I believe I mentioned before that we go to the library in Memphis. Last week on our once every 3 weeks trip ( what is that called - tri-weekly?) we decided to hit the zoo first. The kids were beyond thrilled that Daddy could come. We didn't leave until nearly 2:00 so we didn't have a lot of time. 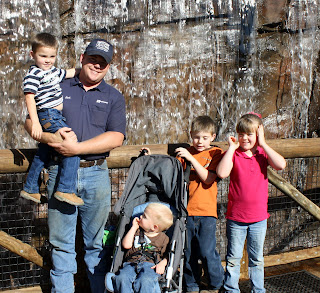 Kent and the kids in front of the water fall that flows under a boardwalk style bridge and then falls again before ending in the grizzlies "river".

It just happened to be the opening day (for zoo members anyway) for the newest exhibit, Teton Trek. The Exhibit is beautiful! We were also thrilled that they opened up the zoo so that access to Teton Trek and the Northwest Passage can be obtained without having to go through Africa and then back up the hill. 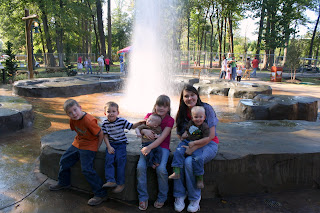 The kids and I in front of the geysers. The rocks were a little wet so the kids weren't willing to take too many pictures.
When entering the exhibit, guests are greeted by "Old Faithful". The entire exhibit is supposed to be reminiscent of Yellowstone National Park. This fountain is a little different from the geyser in that it has several smaller streams as well. We were there on a fairly warm day, after school hours and there were wet children everywhere! I'm not really known for being "fun" so we kept our kids dry. :)

Interior of lodge. (photo from MemphisZoo.org )

After entering and exiting the lodge, a boardwalk is set up that takes you on a trip around Yellowstone. There is an observation window that cuts into the grizzlies lake/stream area. The kids were impressed that there were fish in the stream. We later learned that the bears can/do fish in the stream. The boardwalk/trail leads to an area with a pair of swans and some cranes. The docent told us that the swans on exhibit have hatched over 20 eggs that have been released into the wild. Swans mate for life. 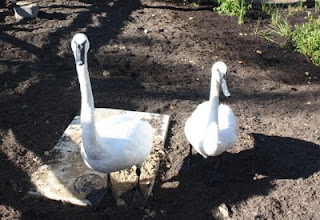 Once on top of the hill you stand beside and over the waterfall. The grizzly area is between the waterfall and the lodge. 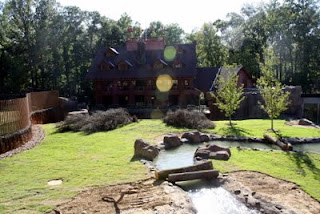 View of the lodge from the waterfall bridge.

After crossing the waterfall, the grey wolves home is the next portion of the exhibit. Elk are on the way but that part of the exhibit isn't finished yet. I think they better wait until all the fences are up to put them in their new home. Can't you just imagine the news stories of elk loose in mid-town? :) 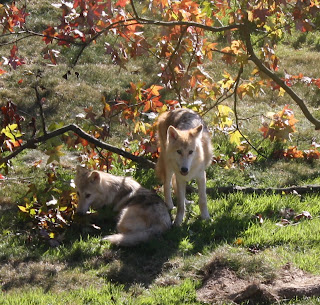 Two of the four Grey Wolves. Didn't they hear that Red is the new Grey and choose to support Arkansas State? LOL
at 12:18 PM