It's a TWENTY-FIVE year tradition!

When my dad starting teaching school at Augusta, he started taking students to the Arkansas State Fair on 4-H/FFA/FHA day (yes I know it's now FCCLA but it wasn't 25 years ago ;) ). We were like kids at Christmas. Get up at the crack of dawn, eat breakfast at McDonald's, RIDE the SCHOOL BUS! Those were exciting times.

I know dad is glad to have the school bus part behind him but an Agri teacher never gives up on the fair. 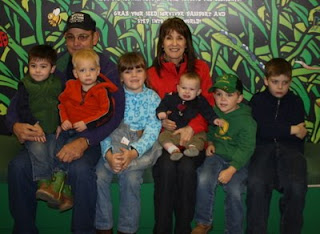 So being die-hard vocational people (Kent won several awards in FFA, I was really involved in FHA, Robin was a FCS teacher and then of course, Dad has us all beat) we started in the FFA barn.

This duck exhibit has been there since the dawn of time. It says build by Vilonia FFA and it wouldn't surprise me if every student that built the original isn't dead by now! Dad and I joked that it's kind of like George Washington's ax that's had 10 new handles and 5 new heads.

Anyway, the ducks were always one of my favorite things about the fair. 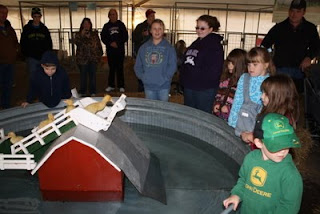 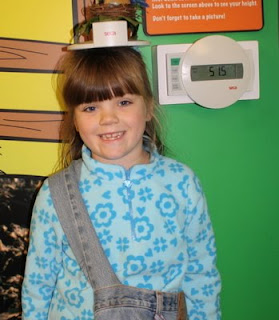 This year they added a new exhibit in the FFA barn about soil. There were interactive games where you had to keep the plants watered, tunnels to pretend you were a worm, and a ruler to see if you grew like a sunflower. 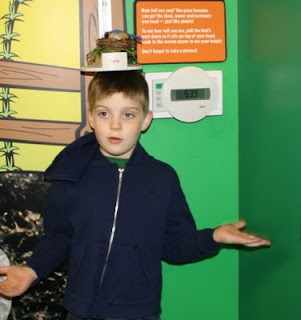 I think this was Ty's "What's the big deal about standing here?" pose. 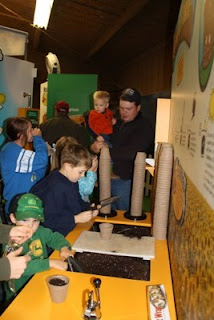 The kids also got to plant a couple of sunflower seeds. (Now for the rant from a mother of 5. Who gives kids plants to take home and watch grow in October. Don't you know that said plants will never make it and the children will be crushed when their beloved Sunflower dies from lack of SUN. Can we please find something to plant that will grow in the fall - Pansy maybe - or tell them how to stick the seeds in the pot in Spring. No more crushed gardeners!) 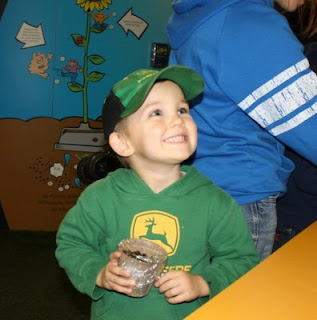 Griffin was very proud of his little pot of dirt and believe it or not - We made it home with all 4 of them (Henry was left out - we'll be starting therapy soon). 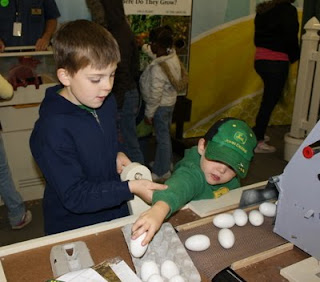 Why aren't they this eager to put the eggs from our chickens in cartons? 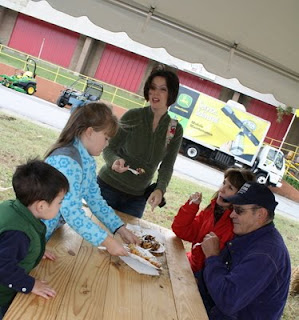 What's the fair without food? We had two funnel cakes. One had chocolate on top. Can you guess which was my favorite. We recently had a potluck and Madisyn noticed most of the ladies got a brownie from the desert table. I might be known to have a stash of chocolate around here. When we got home Madisyn said "Momma, I've noticed that most women seem to like chocolate. That's kind of funny isn't it." LOL Good girl! 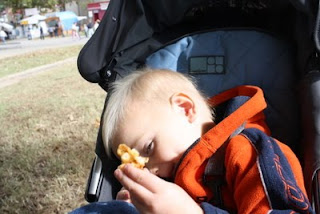 Ben teased me a little that he might share but somehow I didn't actually get a bite. :) 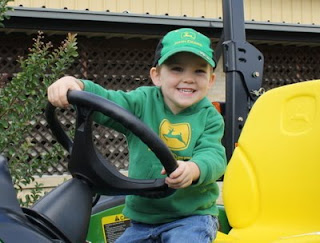 There's Grinnin' Griffin again. The poor child has never had the opportunity to climb on a John Deere tractor before. ;) 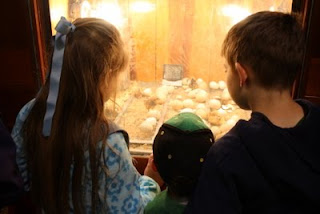 I mentioned on of my favorite parts of the fair as a child was the ducks. I think my kids enjoyed standing here looking in the incubator. Why? 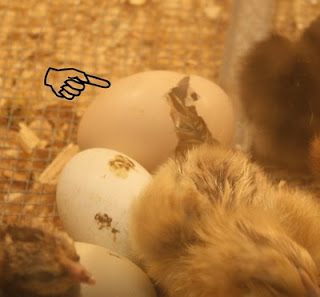 We stood there and watched a baby turkey hatch. He was definitely one of those things only a mother could love. Very, very ugly. LOL

We also visited the Hall of Industry and loaded up on free pencils. I don't they are going to last as long as they have in the past. We seem to go through a lot of pencils anymore. After loading up with free stuff the Witcher part of the crew headed home.

You can check out Robin's version of the day here.
at 2:34 PM