D is for Dinosaur

My little FOUR year old is starting to read! It's oh so exciting. He has sounded out several words with my help but two weeks ago, he read 4 words on his own! Maybe I can figure out how to get video on here. But that's not the point of this post - well, not entirely.

I have mentioned before that we made a curriculum switch to My Father's World . Griffin begged to do school so he started Kindergarten this year. In the past we have used Saxon Math and Phonics for K and 1st grade and I'm not completely sold on MFW K and 1st but I *heart* MFW Adventures and I'm curious to see how they will all mesh together. I really think Saxon is a great program and plan to stick with their math throughout all our homeschooling days. The phonics worked really well and Madisyn has a good grasp of the "whys" behind reading which is my only fault with MFW.

Since Griffin is/was studying Dinos we went on a dino hunt. The last time we went to the Pink Palace was about 2 years ago. He didn't remember anything about it and was a little concerned that the dinos might try to get him. I have never been to the actual "Pink Palace" portioned of the museum but I would love to go tour it some time. The museum part is free on Tuesday afternoons and touring it as the solo adult w/ 5 little ones (mainly 2 certain boys ;) ) is about all I can handle. :) 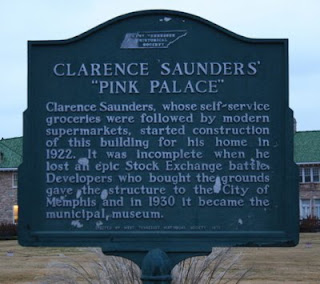 The triceratops in the background used to move around and growl. There is a little sign up about how he's in "retirement". I believe he's been that way for over 20 years. I do realize that their are budget cuts but I so wish the dino could be repaired or replaced so that future generations could experience a "living" dino. 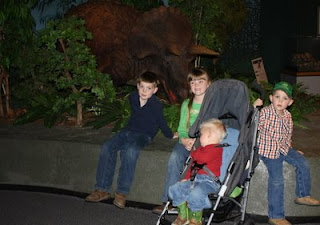 Believe it or not, that was the best I could do. No one was interested in having their picture taken. Griffin wanted to hurry up to see if he could find a living dino. 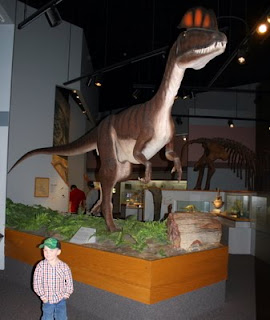 Griffin with another dino so he could show daddy. LOL Once he realized that dinos were dead (except for lizards, etc) he had a much better time. 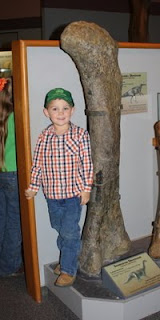 This is a leg bone from a brontosaurus (I think, can't remember exactly). It's the equivalent of our femur (thigh bone). 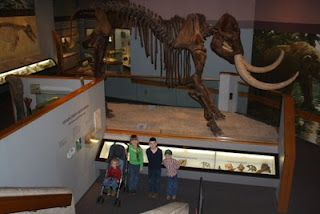 I had to go up the stairs a pretty good way to get the entire woolly mammoth. I think Griffin grasped what a four year old could. His favorite part of the trip was visiting the model of the first Piggly Wiggly. Sadly, I didn't take any pictures there. 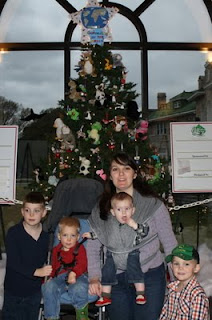 Since Christmas is a coming, the Enchanted Forest is set up in the mezzanine of the museum. Madisyn took this picture as proof that both Henry and I were in attendance. I think I might have a budding photographer on my hands.

This blog post was brought to you by the letter D and the number 8.