Since we moved to our current home we have hosted a hay ride each fall. It began as a birthday celebration for Ty but we quickly realized that we couldn't provide such an elaborate party for all our children (who wants to attend a hayride in June!?!) So now we have the Witcher Family hay ride. It's on a weekend in October or November that works for the auction business. LOL 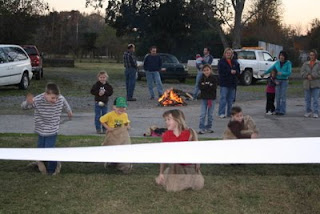 Since our children are getting older and a little better at following directions, we decided to add some "old fashioned games" to the fun. 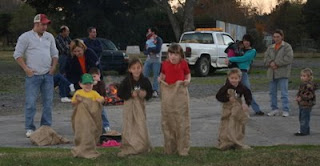 We started off with sack races. The idea of having such an event nearly ruined it. See, I asked by Dad AKA Granddaddy if he had any potato sacks for sack races (if you need something ask Dad - he either owns it or knows where/how to get it ;) ). Much to our delight he said he had some potato sacks. As the kids began telling others and inviting them to the party, we noticed some strange looks and laughter after the invitation was given. Eventually someone let us onto what was so funny. Apparently Ty was telling about the hay ride - what we would do, what games we would play, what we would eat, etc. When he talked about the games he told everyone that we would have sack races.
Sounds innocent enough - doesn't it. Well, he went on to ask the weight of those he was inviting. You see, according to Ty (and later Madisyn and Griff), you can't be in the sack race if you weigh more than 100 lbs. When I questioned them about their information, they told me that Granddaddy said that no one that weighed more than 100 lbs could use the sacks.
It took a while to put it all together but we figured out they heard him say they were 100 lbs sacks. 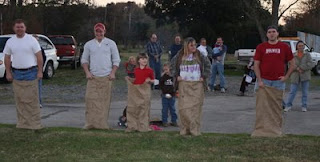 As you can see, we had a few people that weighed around 105 lbs participate and I'm happy to report the sacks held up just fine. :D 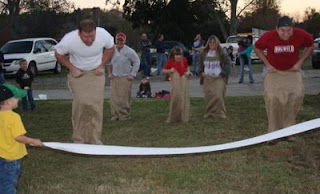 The enthusiasm of Uncle Kirk and Uncle Scott, really helped add to the races. I'm very glad they were so willing to participate *for the kids*. I know they would never involve themselves in such childish antics if it weren't for the poor children. 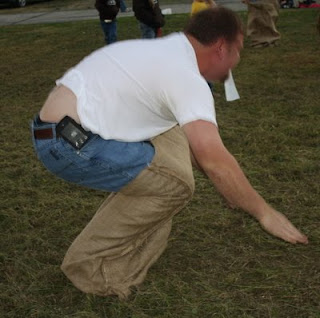 Uncle Kirk almost lost it here, however he was proclaimed the victor. 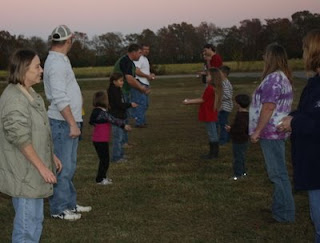 Next was the egg toss. I'm happy to say that no *real* eggs were harmed in the process. We have laying hens and the eggs we get from them are *real*. I'm not sure what that makes the ones at WalMart but I've learned the lingo around here. 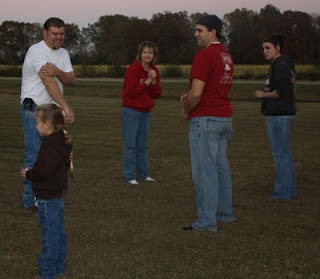 Again, Kirk and Scott were great participants. We even pitted MIL against DIL and they won! Mrs. Janet and Mrs. Hannah's egg never broke. They made a great team. We're really enjoying getting to know Hannah. 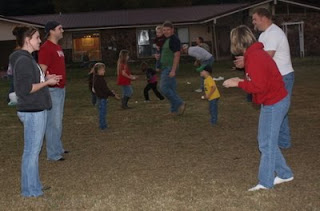 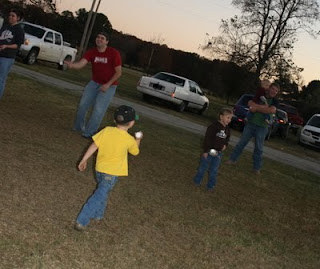 The kids need a little more practice as eggs were often hurling through the air and the receiver had no clue. LOL It's a very good thing the ground was so soft. Most of the time the eggs bounced. 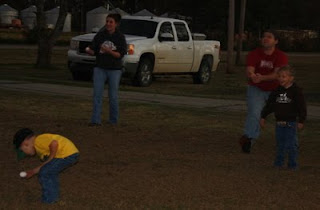 See the look of determination on Scott's face? This picture was snapped just before their egg broke. Kirk apparently has something against sweet, little blonde girls and hurled the egg of death directly at poor Molly's face. Scott saved her in the nick of time but it was too much of an impact for the egg. 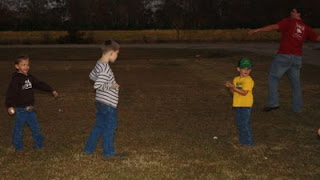 Again, check out Scott.
Yes he and Kirk were throwing the eggs that hard!
I have no idea how far apart they were but I couldn't get them both in the frame of the camera. Since their first egg was destroyed through a courageous act of saving Molly, we gave them another and they got to try again. 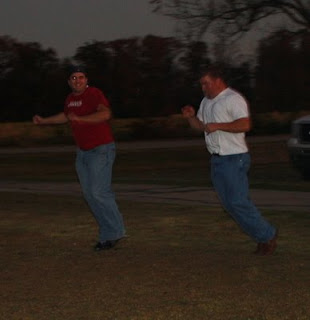 I'm not sure what to call this game. We gave everyone a potato and they had to carry it between their knees and drop it in a bucket. 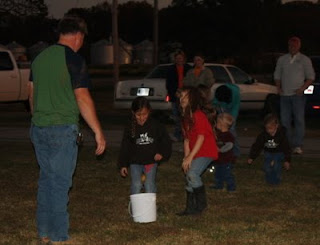 The no hands concept was a little hard for some of the kids to grasp (ok all the kids that struggled last names started with a Witcher) but I think the general idea caught on by the end. 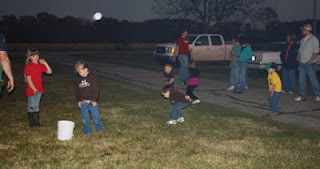 I love the moon in this shot. The games were a big hit and will be back next year. Maybe we'll add some more. What are your favorite "old fashioned" games (ie no batteries, electricity, etc)?
at 6:36 AM