After the games, we moved on the the second part of the hayride - Riding in the Hay! LOL

Mr. Mark has been so wonderful to bring his guitar since our first hayride. We sing most any song, but seem to settle on more hymns than anything. We travel down the roads singing songs to the Lord, what could be better. 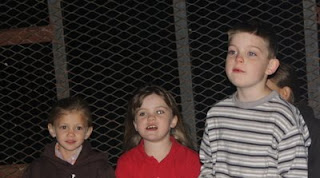 Our kiddos felt really grown-up this year. They didn't have to sit right next to an adult. Yep, I've been trying to keep them little but it's not working. Anyone have any suggestions? ;) 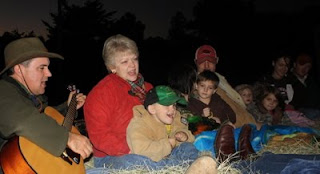 I loved this shot. Griffin is really belting it out. (and if you sit anywhere near him in church you know he does the same there. ) He doesn't care that he doesn't know all the words. He has the "make a joyful noise" part down. 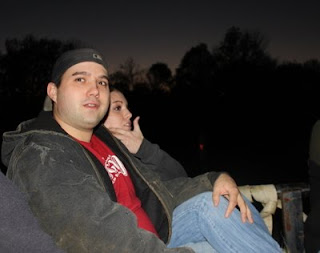 Uncle Scott and Miss Hannah - I think this was their first hayride as Mr and Mrs. It wasn't exactly romantic but I think they had a good time. 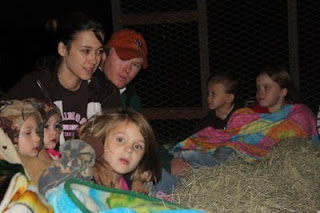 I think grand total we had over 40 people join us at the house and over half went on the hayride. Papaw pulled the trailer and the weather was perfect. Just cool enough to need a jacket and blanket but not so warm you sweat. Hay and sweat do not go well together. :) 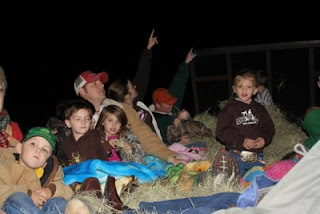 The sky was beautiful. All the stars were so clear. Some of the parents were pointing out constellations to the kids and we cruised along. 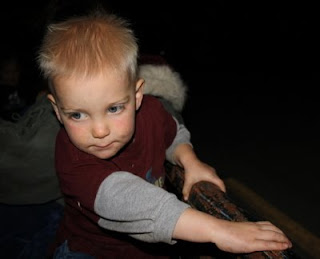 My little wild man. I don't think he stopped moving the whole time. Next year he sits with Daddy. ;) 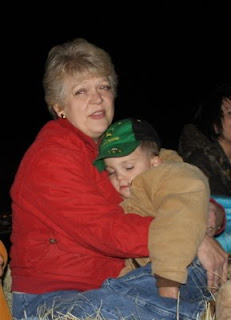 Ben probably wouldn't sit still so he wouldn't end up like Griff. Yes, that little boy that was belting out songs fell fast asleep before we got back to the house. When he woke up he was raring to go again. 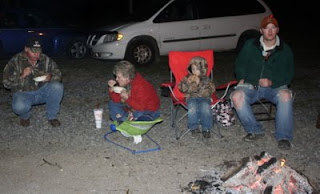 I think the only complaint this year was not enough chairs. I don't know if we had more people bring their own in years past, we've lost some or what. Nobody but me worried about it yet I think it's something we'll try to improve upon. 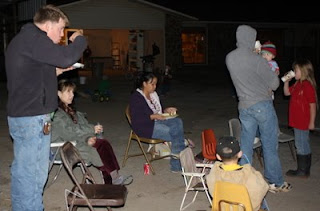 Last year I made a big pot of chili, purchased 80 hot dogs and 2 bags of marshmallows. We had tons leftover. I know I put 50 hot dogs up in the freezer and we ate them over the course of the year. This year I fixed a slightly smaller pot (maybe 1/4 smaller), purchased 40 hot dogs (and found 10 more in the freezer) and had 4 bags of marshmallows and the only thing left over was 1 bag of marshmallows. I don't think anyone went hungry and I prefer the no leftover plan.
We had a great time with all our friends and family and I can't wait for next year. (Now someone remind me of that when I'm stressing about getting stuff ready. ;) )
at 1:24 PM