I remember the first time I took Madisyn to a baby shower and she was old enough to know we were going somewhere. She was around 2.5 and when we left she told me she was confused. She thought a baby shower was so all the other ladies that were mom's would get together and teach a new mom how to give a baby a bath! She was very disappointed that she didn't get to see a baby. She's come a long way since then and she LOVES baby showers now! 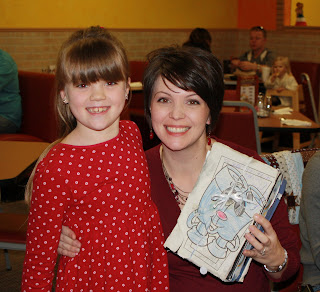 Madisyn worried for weeks about what to get Lynden. She finally decided on a box of pictures and notes from herself and her brothers. She decorated the box carefully without any help from me.

Since Lynden is the 2nd baby, the shower was held at a local Mexican restaurant. The other patrons tolerated our ooohs and aaahs quite well. 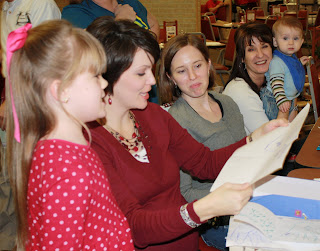 Madisyn was the official present handler. Aunt Robin determined early on that Lynden preferred that Madisyn bend over and pick up the gifts instead of him being squished when his Mommy did it. :) 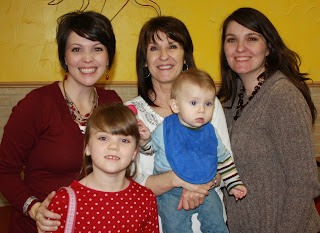 Henry was such a good boy the entire time but I think he was asleep before we left the parking lot.
I was glad Robin asked for a family shot. Aren't we cute! ;)
at 1:02 AM