As many of you know, we had a still birth at 20 weeks over 3 years ago. We were totally unprepared for what to expect during Mallory's delivery and due to excessive bleeding (I had emergency surgery) we never had the opportunity to hold our precious little girl. We did get to see her and she was perfectly formed, yet incredibly tiny. There isn't a day that goes by that I don't think of and miss her. 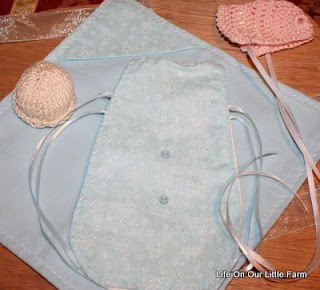 
A friend from high school, Jodie, told me about an organization that meets in Little Rock who creates clothing for these tiny little ones. Holy Sews is a volunteer group that meets once a month. The members of the group cut out the smocks and blankets. Volunteers then take them home to sew them. They also have talented people that make hats to compliment the outfits.

Our experience with Mallory was less than idea. No one wants to lose a child but there are ways to help ease the pain. When I heard about this group I wanted to be part of it to in a small way comfort those families experiencing a loss. My desire would be that no one else is ever shown their child as though they were a specimen. No matter how small, a person is still a person. 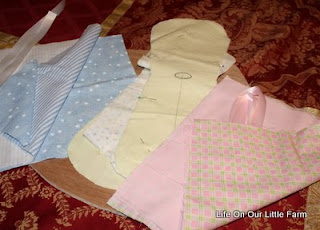 supplies included in a kit

At a recent meeting, Jodie collected supplies so that I could become one of those people reaching out to a grieving family. She sent me a sample and two sets to complete. As I sewed the fabrics I was first taken away by how tiny they were. Most of the babies the clothing is created for are between 7 and 10 inches and weigh only a few ounces. Having been one of those families, I found myself praying for the future recipients (as I'm sure lots of volunteers do). It's one of those gifts you don't ever want to receive. 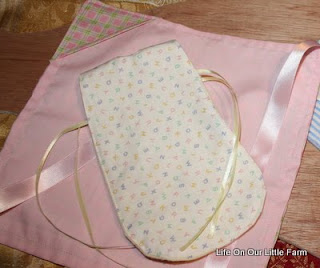 As I thought back to our own experiences I couldn't help but remember how perfectly formed Mallory was. Right from the beginning, God creates our children as just that - children. They aren't little pieces of tissue that eventually become human. They are human.

In the sample that Jodie sent, was a tiny pink bonnet. It measures only a couple of inches across. The ribbon ties are only 1/8 of an inch wide, yet it contains every detail that you would find on a normal sized baby bonnet. When I packaged everything up to be sent to the organization, I kept the bonnet. I'm not really sure how long I'll keep it. 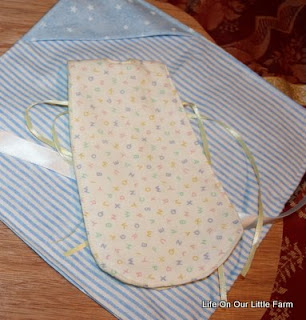 There's something about it. I can't quite put my finger on it. It definitely reinforces the reason I'm involved with the group. It provides reassurance that other people believe that life is precious and sacred no matter how small the person is but most of all it reminds me that people care. That there really are people who care about others. I have no idea who made that bonnet. I may never met her. But, I know she cares. She cares about people like me. She gave some of her own precious time to attempt to comfort someone she doesn't even know. I also realize she will probably never read my blog, but I want to thank her. I want to thank her and everyone involved with this group and others like it. While I know that volunteers don't do this for the thank you's or praise,but I want them to know they are making a difference - even for someone whose baby went to be with the Lord over 3 years ago.
at 6:36 AM