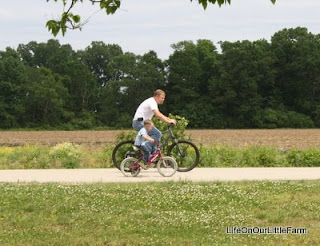 For Madisyn's birthday, she received a "big girl" bike. She has been zooming all over the yard and driveway having a great time. In her discussions with everyone about her new bike, she asked Unc to come and join her on a ride. 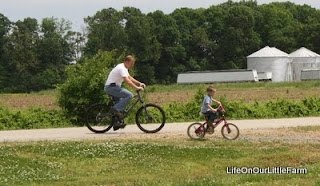 So, one Sunday afternoon Uncle Kirk brought his bicycle to the house to ride with the kids. Griffin *had* to go first. We let him ride on the highway from one driveway to the other and he thought he was something. I wish I could have captured the magnitude of the grin he had. 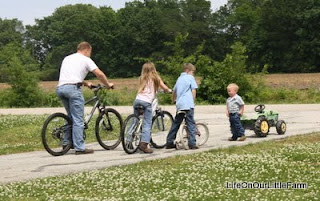 Next, Madisyn, Ty, and Unc were going to head down the road. Ben didn't know that he liked this plan. What was he going to do while they were gone. . . . 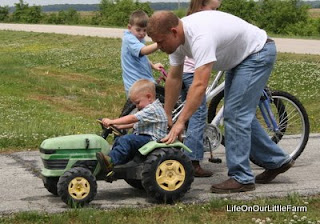 So, Unc gave him a couple of pushes on the tractor and all was right with the world again. :) 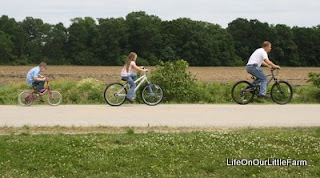 Ty was at a great disadvantage because his bike had much smaller wheels. The poor boy was pedaling about 10 cycles to Madisyn and Kirk's one. {Can you guess what he wants for his birthday? :) } 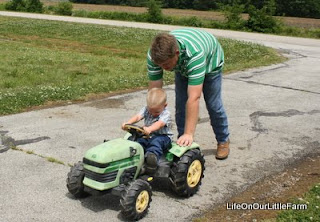 When Ben fully realized that he had been ditched by Unc, he busied himself by getting Daddy in on the action. 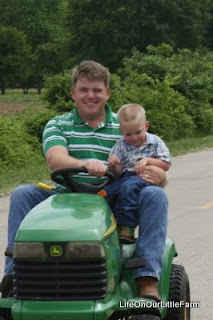 Even better than a pedal tractor - a lawn mower! Ty soon gave up his bike riding ambitions as it was just too hard to keep up. Madisyn and Unc headed down the road in the other direction for another ride. 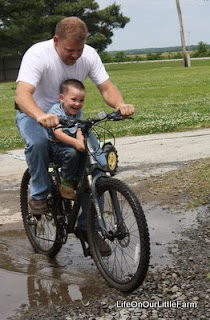 When they returned Griffin learned a new way to ride a bike! It's a bicycle built for one and a quarter. ;) 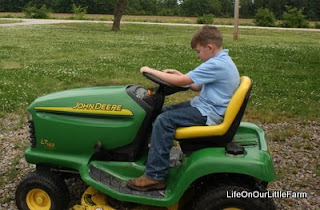 Somehow Ty worked through the pain of a inferior bike, by consoling himself with driving the lawn mower. He had a hard time reaching the pedal and being far enough back in the seat to keep it running.
Where was Mommy? After these pictures were taken, she attempted to take a nap. She knows better than to lay down when the kids are playing outside. Is it the thought that counts on naps as well? :)
at 8:00 AM