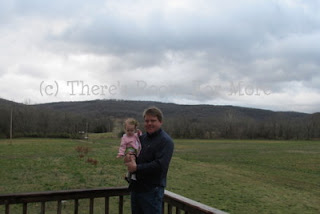 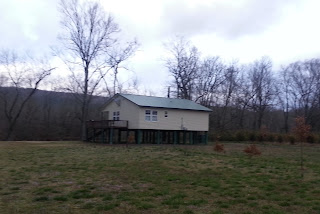 A few weeks ago Kent and I had the opportunity to attend a Marriage Retreat at Fort Rock. Fort Rock is located in Northwest Arkansas in the beautiful Ozark Mountains. When we learned of the retreat, the cabins at Fort Rock were already full so we stayed with Turner Bend Outfitters. ﻿ 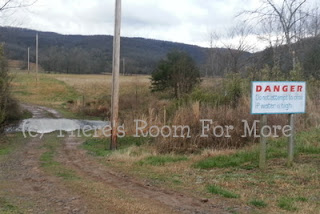 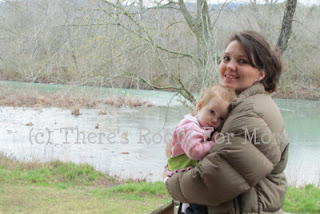 They have two cabins available for rent. The cabins are right on the Mulberry River. We spent most of our time at Fort Rock so we didn't have the opportunity to fully enjoy the beautiful scenery just outside the cabin door. Turner Bend has made it's way on to our short list of places to visit for a weekend getaway {like that 15th wedding anniversary coming up, hint, hint ;-) }. 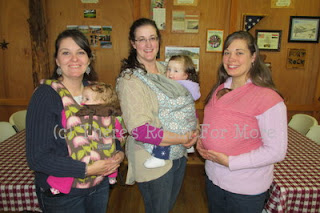 At the marriage retreat we were super blessed to be able to attend with our wonderful friends. Jess and I have been friend for about 5 years.  I think friends you meet as an adult are some of the most precious relationships that exists. I am incredibly thankful for the friendship that not only I have with Jess but with the friendship our families share. Check out what Jess thought of Fort Rock, here. 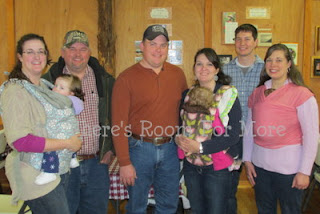 Last fall we met the Tim's Family and they are quickly becoming those precious adult friends. Candyce is so very funny and she is one of those people that just radiate joy. {You can read Candyce's version of the Fort Rock experience here.} 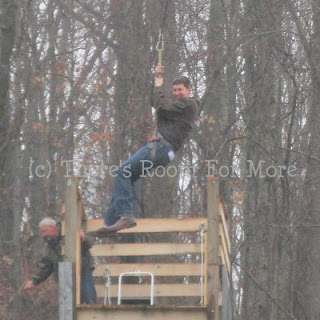 There were two parts to the retreat - activities and the wonderful sessions on strengthening marriage and families.

Jake was the first in our group to brave the zip line. I honestly think I was less nervous before he began telling me about it. The stopping mechanism didn't sound very enjoyable but his story wasn't enough to deter me. {I just knew my sons would be impressed that I rode the zip line, they weren't. LOL } 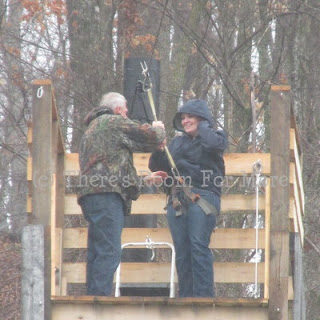 I was next. I have to say it was actually fun. Our visit to Fort Rock occurred on a cold, nasty, wet, rainy and even snowy weekend. When I first went down the line I was freezing with the mist and wind in my face. Then the harness spun me around and I was travelling backwards. While I didn't like not knowing where I was going, it was nice to not have the wind blowing my hood off. I even managed to wave at the onlookers as I soared over their heads. 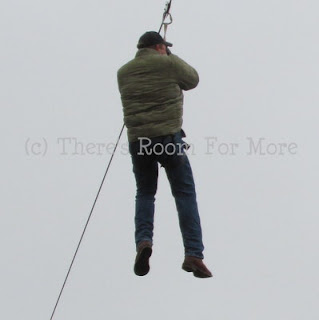 I guess because I was a lady, I was given the royal treatment when it came to stopping. They have a bungee system that "catches" each rider at the end of the line. The bungee then sends you back through the exit point where another bungee sends you forward again. Since riders can reach speeds of 35 mph something is required to slow the rider down. Instead of the second bungee ending my ride, the great staff caught me and helped me down. Kent went back through the second time. Another activity we went on was horseback riding. When it was over, I said "Never Again!". Now, I think it would be fun. It has been years since I've been on a horse for more than a few minutes. By the time the ride was over, I think I was getting the hang of it. By that time I was cold, wet and sore. 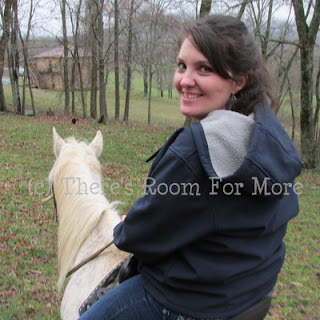 I really had a good horse and when we return, I plan to hop on for another ride. 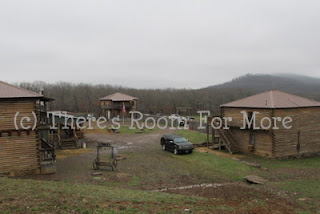 Fort Rock is set as an 1880's western town. The bunkhouses are log cabins {each house contains four cabins for four families}, and the main building has a bank, library, trading post and jail. Our children love all things western so we have already made plans to attend a family camp in July {and our wonderful friends are going with us!}. 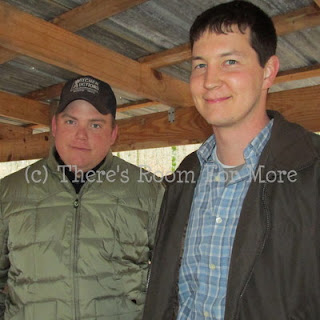 A nice thing about the marriage retreat was that the activities catered to both men and women {seems like a no -brainer but often couple activities favor one gender}. There was plenty to keep the women happy, the men busy and lots of time to enjoy things together. 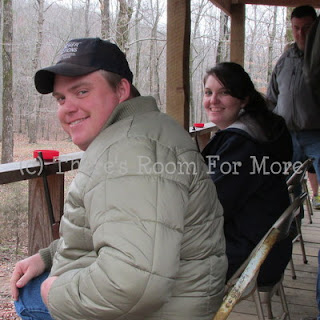 Each couple was a team. The teams competed in archery, target shooting and tomahawk throwing. The points earned by each person were put together for a team score. {Kent's partner was a little lacking in the accuracy department. ;-) } 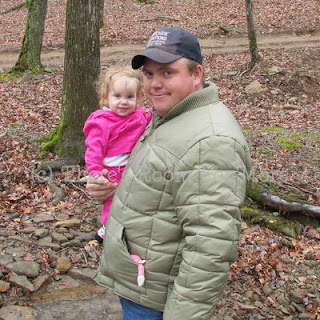 We were incredibly thankful that nursing babies were allowed at the retreat. Otherwise, we would not have been able to attend. Liberty had good company with Clara {we were asked if Libby and Clara were related - they do have several similar features, mostly the hair!} and three week-old Arynn. 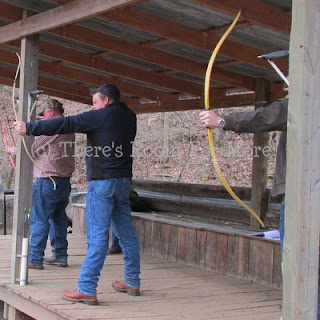 Kent was awesome at the archery. He was the only one of our group that didn't have to hunt for his arrows when he finished. He got them all in the target - every time! 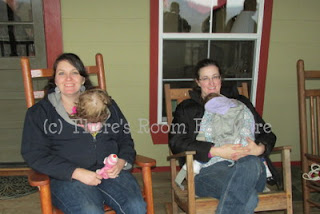 After completing the outdoor tasks we rocked the girls on the porch while we waited for the evening's speakers to arrive. I commented at what great restraint we all showed by not running directly to Jim Bob and Michelle Duggar. 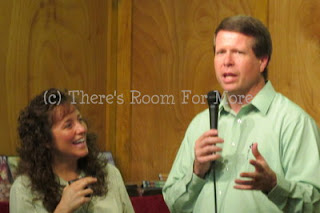 Jim Bob and Michelle echoed many of the things that Dr. SM Davis spoke about through his sessions. Strong families start with strong marriages. It's so easy to "put off" a spouse to attend to the needs of children but in the long run, this practice is actually detrimental to the children. One of the messages that we took the most from was titled "Expectations Ruin Relationships". How often do we allow the things we think we're entitle to ruin a relationship? It was really an eye opener for me. I am not entitled to anything and often put things about people because I "expect" certain behaviours. We purchased more of Dr. Davis' messages and have been enjoying them at home as well. Just be prepared to have your toes stepped on! 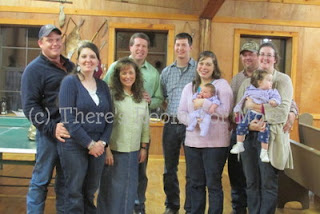 When the Duggars first arrived we waited in line to have our picture made with them. Just as it was our turn, dinner was served {which was wonderful as were the rest of the meals} and we had to wait and try again. Once they had finished speaking we hung around and got to talk with Jim Bob and Michelle for about 30 minutes. Michelle is just as sweet in person as she is on TV. Jim Bob and Kent got to talking about auctions and equipment. ;-) 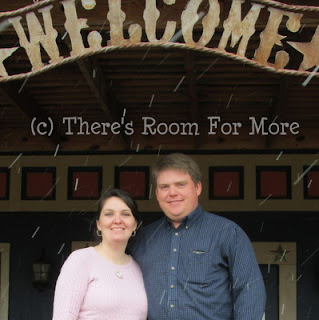 While the Marriage Retreat was not something I felt I truly "needed" it was wonderful to spend a weekend with Kent and focus on us. It's so easy in the busyness of homeschooling, cooking, cleaning, running two businesses, pastoring, etc to take a relationship for granted. I highly recommend attending something as a couple. I am very glad we did {and I hope to go again} !
at 1:37 PM