A little over a week ago, we attended Fort Rock Family Camp. We had a great time and since I took over 500 pictures in three days, six posts about our fun are in the works. I'm going to post them every other day so I can share some other things we have going on as well. So stay tuned for more! 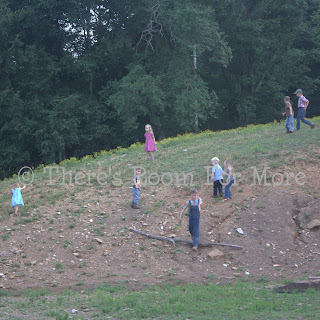 We arrived on Thursday night and settled into our cabin. Each cabin has a queen bed and two sets of bunk beds. We only expected four beds for the kids and had told the younger ones they would have to share. When we got to camp we found that the staff had placed two extra mattresses in the floor for us. We also brought a Pack N Play for Liberty. The cabins are designed to look like rustic old west cabins from the 1800s but with all the important things like air conditioning and indoor plumbing. ;-) 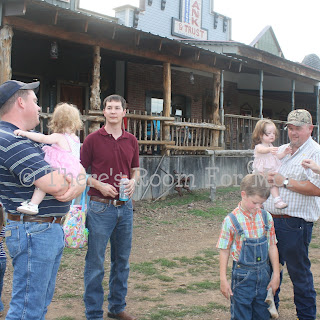 We were fortunate that our friends, the Mashburns and Tims we also able to come during our camp time so we already knew 2 of the other 15 families present. After we unpacked the van, made the beds and headed outside for some free time. 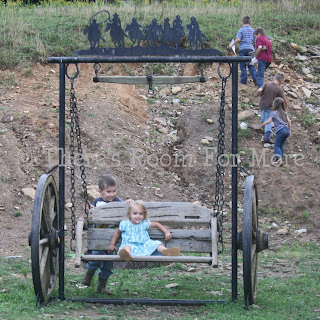 Fort Rock is in the mountains of Northwest Arkansas and our flatland children loved running up and down the hills. They picked flowers and found lots of neat rocks. 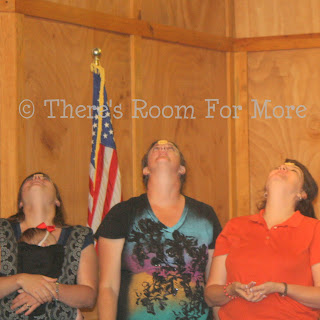 We had two family sessions each day. We sang songs, played games and heard from various speakers {a few gave testimonials and one man brought a few sermons on family}. One of the games we played involved the moms. Each mom was given a cookie to place on her forehead. Without using our hands we were to move the cookie down to our mouths. The kids and dads had a great time cheering us on/laughing at us, little did they know - their time was coming. 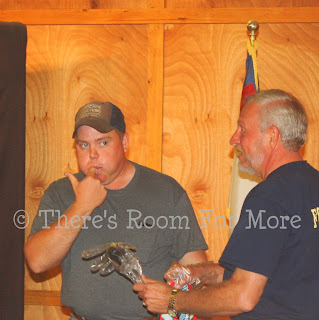 The dads played a game called Chubby Bunny. They started off stuffing three large marshmallows in their mouths and then said Chubby Bunny into the mic. The dads that said it plainly advanced to the next round. I believe they got up to 11 marshmallows before the winner was crowned. 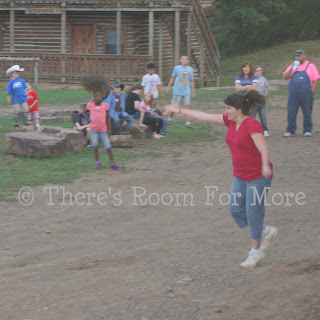 The moms we involved in another game, skillet tossing. We were given iron skillets and we tossed them as far as we could. I'm happy to report that no one was injured in this competition. ;-) 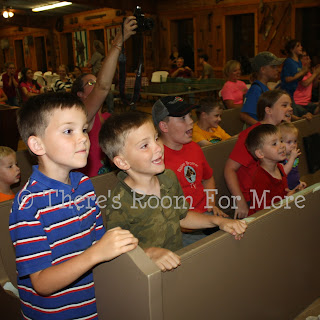 During each game there was lots of cheering and laughing! 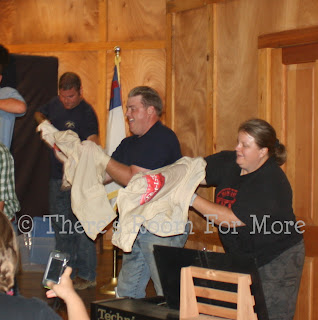 The last game the dads played was wearing frozen t-shirts. The shirts were wet down and then folded very compactly. They were then frozen. Kent said it was really hard to get the material to separate. It was really stuck together but as time went on, his hands were going numb. 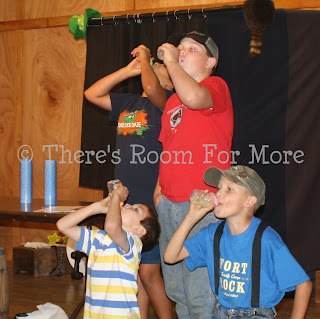 The last game involved the kiddos. The director picked one child from each family to participate. They were given baby bottles filled with lemonade. The first one to drink it all, won. You could tell this game had been played several times because the rules included no removing the lid, no biting, etc.